Ride Puig Major and Reach the Highest Point on Mallorca

Mallorca has several fantastic cycling routes and like Cap Formentor and Sa Calobra, Puig Major is one of them. In fact Puig Major, which is part of the Tramuntana mountain range is the second most popular climb on the island, thanks mostly to being the highest reachable point. The mountain stands tall at 1445m. Although you cannot reach the summit of this climb it is still an achievement to complete it! The 14 kilometre trek will test your limits like any good mountain should!

The most popular climb on the island is Sa Calobra made famous by Sir Bradley Wiggins who used the hairpins to train before the 2012 Olympic Games.

Puig Major is the highest reachable point in Mallorca

When you ride Puig Major you will ride a steady 6% gradient. The real challenge is the 14kms of route to reach it. Starting from Soller which is at sea level, you ride the Ma-10 until you reach the Monnaber Tunnel, the summit of Puig Major. Like most roads in Mallorca, the road is perfect for cycling, as it is long, winding, and smooth. The steady gradient you will feel in your legs but the gradients never reach the dizzy inclinations of 10%+ that you would find on say Mont Ventoux.

Fornalutx – “The prettiest village in Spain”

If you’re not trying to achieve a personal best then you may want to stop and refill your water bottles and have a coffee in the village of Fornalutx. It states that it is the “prettiest village in Spain” and it could well be. It is situated at the top of the Soller valley and has wonderful mountain views. It has a number of cafes and restaurants to refuel and refill, and you will notice the olive and orange trees which stretch all the way to your destination, Puig Major. 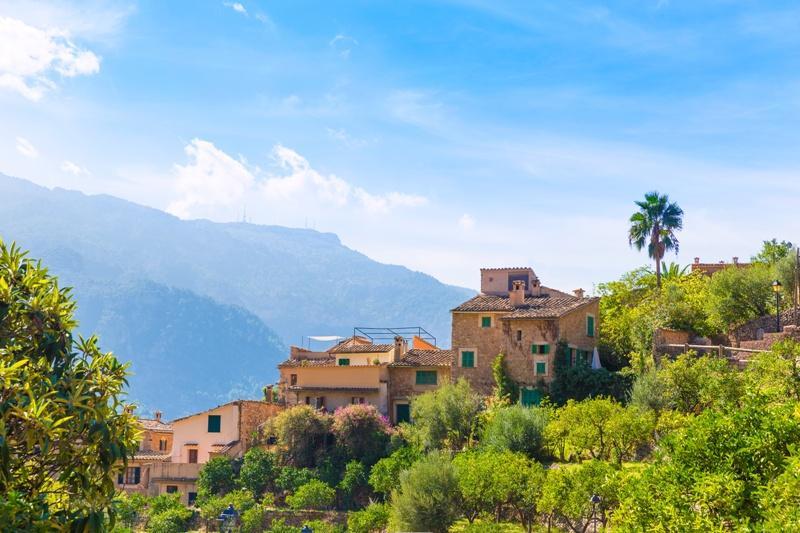 Fornalutx - "The prettiest village in Spain"

To reach Fornalutx you take a small detour from the Ma-10 about 4 kms into the climb.

An alternative from the popular Soller route is to begin the climb at Carretera de Fornalutx taking the Ma-2121 road which will take you through Fornalutx. This is the only difference in the route, however, as from Fornalutx you take the MA-10, riding the last 10 kms on the same road as the Soller route.

The views from Puig Major have to be experienced. The view of the sea and the mountains and valleys below give you a perspective few in the world will ever get to appreciate. You will also have that beautiful feeling of achievement from riding to the highest point on Mallorca. Make sure you have your phone or camera with you to take pictures.

To ride the best rides on Mallorca, and improve your cycling to ride further and faster, our Mallorca cycling training camps, will take you to the best rides on the island including Puig Major. Come in April or October, and you could be riding with Sean Kelly.

It really doesn't get better than this.